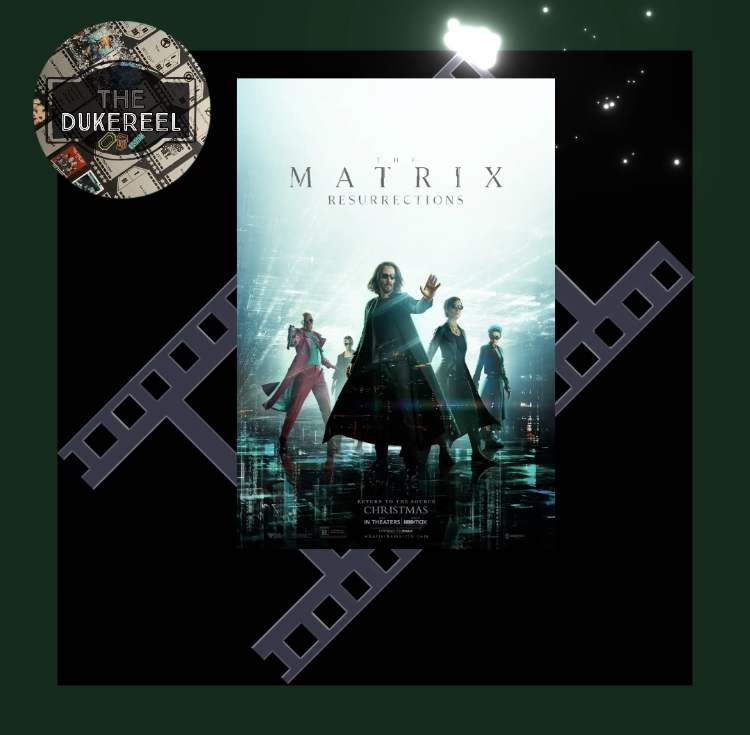 I really do wish I’d been in theaters for this film, but Covid had different plans for me unfortunately. Anywho, the film still proved to be pretty entertaining.

1. A team of “coders” (to be synonymous with an underground team of ninjas/combatants) with ) take on a mission to free known, and thought dead, legends of a simulated universe history in order to help them continue their fight for liberating the human race from the control of machines. This is The Matrix: Resurrections, and due to following a familiar framework of the prior 3 films in the franchise, it’s nostalgically well done.

Acts Two and Three were the most entertaining moments of the film for me, once our protagonist finally finds his footing, and the story begins to feel a little more organized.

Act One felt a little disjointed here and there (especially the opening scene). There were flashbacks that I feel could have been used to set up the premise of this installment in a more intense, action packed way vs using the light-hearted, mind-boggling millennial tone it ultimately takes. Additionally, even though I had tolerable enjoyment, I wasn’t the biggest fan of using the video game concept in Act One—even if it was a creative way to add to the nostalgia.

SN: I don’t understand why many reboots are choosing to add levity to these new installments. #NotAFan 🤷🏾‍♂️

2. Similar to my feelings about my interest in the film picking up starting with Act Two, this is the same regarding the characters. This is not to say that performances were bad, they just didn’t seem worth caring about—even Keanu, who was just exciting to see.

As the film progressed, I found myself actually loving Seq, Tiff/Trinity, and The Analyst (although he was very predictable the moment he was introduced on screen). Everyone else were just really well choreographed scene fillers—some with more lines and initial importance than others. And yes, even Keanu came off a little less interesting as a character vs seeing him just finally get his mojo back (I was more into his body/action vs his person…).

Also, Keanu’s character felt a little rushed to get back to “Neo.” It was as if editors knew that Act One’s time with Keanu was going to get boring and annoying, so they quickly made it so that “Neo” could get the audiences back just in time. 🤷🏾‍♂️

3. During the Morpheus vs Neo fight, I was a little annoyed with the following line: “I know why you’re here, why you’re still fighting, why you won’t give up…Come on, fight for her…”

But at the time, he wasn’t “fighting…” and technically he had “given up” …I don’t know why the line didn’t say, “I know why you chose the red pill even though you hesitated, so show me! Show me why you’re here!” Or something like that..🤷🏾‍♂️

5. Yeah, I think was just the right amount of screen time for Yahya. 👍🏾

6. I agree with the Analyst…Swarm Mode was pretty cool. 👍🏾👍🏾

7. The fight scenes… eh. They were actually a little slow. The power and speed I expected came during the post credit, and it was just a few kicks. 🤷🏾‍♂️

9. The Matrix: Resurrections has a run time of nearly 150 minutes, and it moves quite interestingly. It’s not slow to the point of being boring, and it’s not fast to the point of feeling confusing, BUT there are moments where both of these points do exist–mainly in Act One, and also a little bit in Act Two with a particular loop in the Matrix/“modal.” 🤷🏾‍♂️

10. Like the previous films, Resurrections continues to with a message that focuses on the importance and power of freedom/liberty/our rights to a free-willed life and the consequences that come with that life.

Act One basically sets the tone for us seeing Keanu’s character existing in a world and life that looks and feels too controlled.

Act Two brings about the explanation to Act One—how “The Matrix” has pretty much evolved in order to continue exploiting energy from people through control. It also allows our main character to regain control over himself and his Self, bringing about the need for a more specific mission of freedom within the Matrix.

Act Three then follows up on Act Two with completing the mission and coming to some resolution.

The thematic continuity was pretty decent, but I feel it could’ve been much stronger with a shift in the Act One foundation that wasn’t so “light” and actually more intentional.  🤷🏾‍♂️

Overall #TheMatrixResurrections is a nostalgic mashup of The Matrix Trilogy – meets The Good Place – meets Jumanji: Welcome to the Jungle – meets the animal-machine splice of Leviathan by Scott Westerfield – meets the Strucker siblings of The Gifted.

I personally enjoyed the film and all the nostalgia is gave despite it not being a film I think I’d watch again in the near future… far future maybe…but not near.

Again, I was home with Covid during the opening weekend and week, but even from the comfort of my home watching on HBO Max I could tell it had really great theater experience quality at least. I don’t know if we really needed a 4th, but if it is meant to help usher in a new generation, I guess I’m interested to see where it goes.